The following is an excerpt from Tackle OSHA’s Top 10.

Hosted by Chief Safety Officer Jill James, you can listen to the webcast on demand.

When I mentioned fall protection earlier, I said in construction settings, the rule is anything six feet and greater, in general industry settings, it's four feet and greater, and then when it comes to scaffolds, it's any time an employee is exposed to a fall hazard of 10 feet or more.

So, if you're wondering why is it so different, well, it's different because it's dependent on who is negotiating during the time the laws were passed, so there's always a public comment period, and negotiations happen like they do in many aspects of life, so six feet in construction, unless you're doing connecting work, as a steelworker, then you can work without the benefit of fall protection for up to 25 feet, but other construction sites it's 10 feet, general industry six feet, and if you are on a scaffold in either general industry setting or construction setting, the rule is 10 feet. 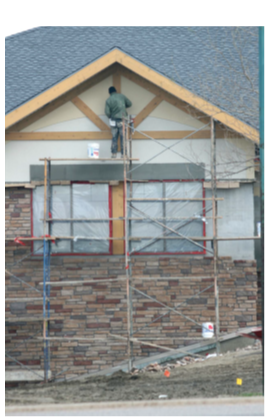 So how do we know it's 10 feet on a scaffold? Usually, most frames of scaffolds are about five feet, so we see that this is two frames high, in this particular picture, so this person is somewhere right around that 10 foot mark, and what my eyes would be looking for here is that we have several hazards with this particular scaffold system.

Where the employee is standing needs to be fully decked. That means from end frame to end frame, we can see we only have one board the employee is standing on. That entire deck where that person is standing needs to be complete, all the way across. They do not have any kind of fall protection. They're not tied off, and they don't have a complete guardrail system. Those would be two options there. The X-bracing is not in place on the left side of the photograph, so those would be some real easy low-hanging fruit hazards to be noticing in a situation like that.

With regard to this one, we can notice the same thing. We have incomplete decking. This one doesn't have wood decks, but it has metal-clad decks, and it's not stretching all the way across the potential work areas, and if you look really hard at the center of the photograph, you'll see we have a couple of people standing on what looks like a bridge between two scaffolds, and that's likely not a good situation either, and they don't have any kind of guardrail system on that one.

And if you take your eyes and look to the bottom of this screen, with regard to scaffolding, there has to be two things that are keeping that scaffold level, and so that it doesn't collapse. One would be feet that are supposed to be at the bottom of each scaffold leg, and this scaffold doesn't have a little metal foot anywhere that I can see on that photograph, and then in addition to that, those feet need to be set on what's called a mud-sill. Those would be the boards that you see some of the bottoms of the scaffolds sitting on right now, and they're not all on a mud-sill, which means that if we have a rain, or maybe there's gravel, or maybe that ground becomes soft, that whole scaffold can tilt, and perhaps tip all the way over. So the benefit of the feet and the mud-sill is to be able to keep that scaffold standing straight. 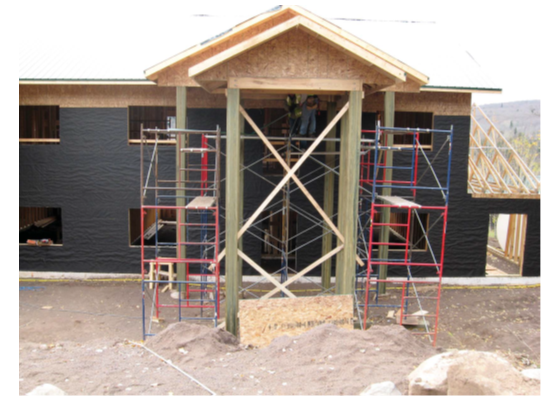 And I think we just talked about most of those on that list. Something else that happens, often in colder climates, particularly in the winter, is employers will wrap their scaffolds, like with Tyvek wrap, to keep employees warmer on the inside, and away from the winter elements. Then they'll heat the inside of those scaffolds, often with NIPCO heater, that's powered by propane, and if you can imagine wrapping up a scaffold and heating the inside with something powered by propane, what could happen is we could have a carbon monoxide exposure, very, very quickly, if that heater isn't vented properly.

So if you happen to be an employer who works with scaffolding, and you wrap them in the wintertime, and you're heating them with some type of heater, you want to be able to provide your employees with carbon monoxide monitoring, so they're not being overexposed, and to ensure that those heaters are vented, and not to the outside, so that you can have some airflow.

The community that I live in had a wrapped scaffold at a school building that's being built right now, and a wind came up, and that wrapped scaffold became like a sail, and knocked over the entire scaffold system. Luckily, it happened at a time when employees weren't working, but know that wrapping a scaffold can also make them really susceptible to wind and tipping over, as well.

Oh, is scaffold training required? As the laws are written for construction, in the 1926 regulations, it is required training for the construction trades, but it isn't mentioned in the general industry laws. There is a law in the OSHA Standards 1910 about scaffolds, but there isn't mention that employees must be trained. Is that a good practice? Should it be a good practice for you to do? Absolutely, because as you can tell, it's kind of technical to know how to erect a scaffold properly.