The following is an excerpt from Tackle OSHA’s Top 10.

Hosted by Chief Safety Officer Jill James, you can listen to the webcast on demand. 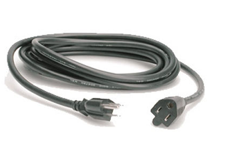 The photo on the left is an example of a ground pin that's been broken off and missing. That's something that investigators will be looking for. It's something you can do in your own safety audits. If you happen to find that pin sticking in an outlet somewhere, don't take your needle nose pliers and pull it out, unless you have de-energized that using your lockout/tagout procedures, that we talked about earlier.

So everything in a general industry setting or in a construction setting has to be grounded, meaning those, a ground pin, unless the tool or equipment is what we call double insulated.

The photograph on the right is a knockout in a standard outlet box, that has been pushed in. The hazard with that is if an employee comes up to that, and is plugging something in, and their finger inadvertently goes into that hole that has been knocked out, they can make contact with live electrical parts inside that housing, so that's definitely a hazard, and something you'd want to correct. 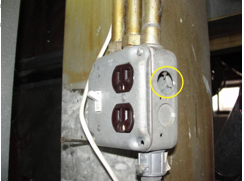 On the right-hand side, if you happen to see outlets that have some of these black markings on them, it could be an indicationn that the outlet itself has been wired improperly, and maybe we have a reverse polarity circumstance, that's causing some arcing in that particular outlet.

So those are things I saw very often, as well as inappropriate use of extension cords. We see that yellow extension cord, my eyes would be very much on the lookout for orange, green, yellow cords, and when I saw them, I would follow them, to see where they were going.

Extension cord use is not allowed, unless it's in terms of temporary wiring. Temporary wiring is anything that's used for 90 days or less, so if I saw an extension cord that was powering maybe a fluorescent light system, or maybe some tools or equipment, and there are all kinds of zip ties that were fastening that extension cord to a workbench or something, that was an indication it was being used in place of permanent wiring, and those are really standard citations to issue, as well as cuts in electrical devices. You can see that there's black electrical tape on top of this cord. This would be where I would be unwinding that tape and looking to see if there was a cut or a nick in that cord, and if so, that's a violation, because that black tape, or duct tape, does not provide the same insulative qualities as the original cord. So that'd be something you'd want to replace.

The bottom picture is showing an opening in a breaker panel. This is a hazard. You can see the black electrical tape where someone tried to cover that up. That's not an appropriate way to cover the opening in the electrical panel, and that is exposing the employee to what's called the bus bar in the back of the panel, which is live electrical parts, that if you didn't know that, you could get electrocuted.

So the proper way to close openings in an electrical panel is that little blank that you see on the right. There are little plastic, or metal sometimes, tabs that go into an electrical outlet, or a panel rather, to close unused openings in breaker panels.

So other things to be looking for would be ground fault circuit interrupter use. You're familiar with those if you own a home, and you've ever been in a bathroom or a garage, where you see the test and reset button. That's a ground fault circuit interrupter. Those are meant to protect people, and they trip out before the electricity can electrocute you or provide a shock. Those are mandatorily used on all construction sites, and in general industry settings, you want to be mindful to use them in any wet locations.

We already talked about inappropriate use of extension cords, and you certainly don't want to cascade one cord into another, or one multi-strip outlet into another, so check in the knee holes of people's desks, and see if you have that situation going on.

And if you're ever feeling heat from an electrical device, particularly a breaker panel, that's an indication you may have some things that are overloaded. I wouldn't recommend placing your hand on the electrical device, but if you're getting close enough and you're feeling heat coming from it, you may want to investigate that further with an electrician. And again, we talked about the need for everything to be grounded with a ground pin.

So is electrical training required? Yes, it is. So that's something to be training on, and I can see that we have a few minutes, where I am very happy to take your questions, and if you have questions, Barrett will be sharing them with me now, but I thank you for your attention, and I hope that you learned something today, by way of a way to enhance your ability to do some of your safety audits in your workplaces.