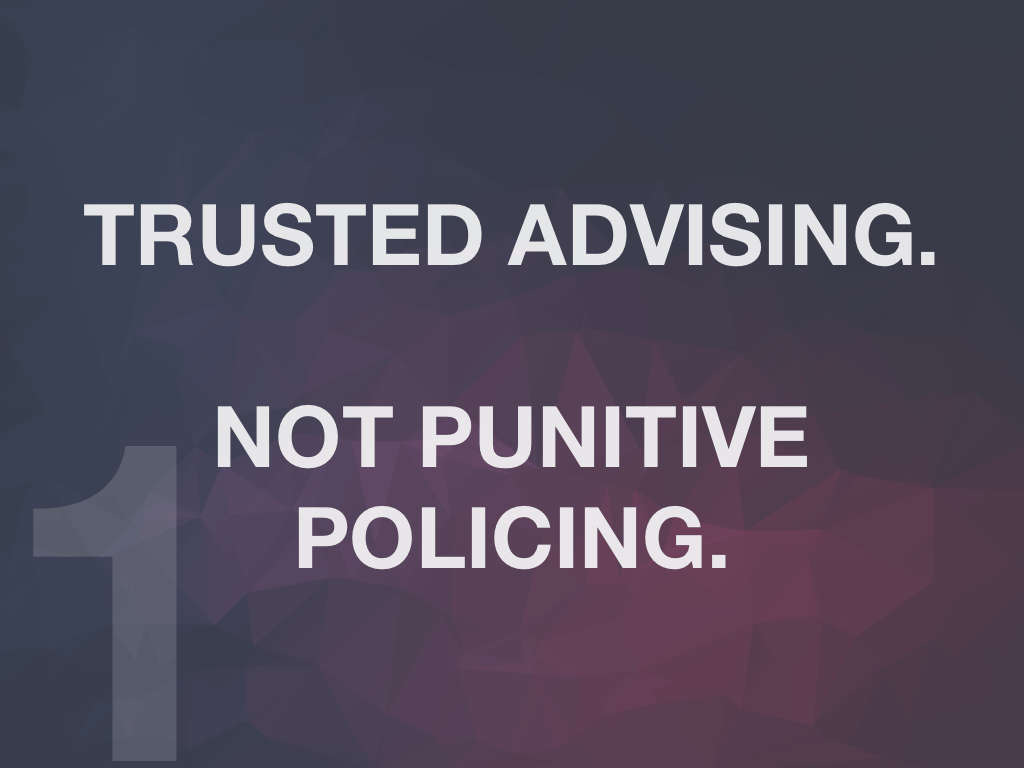 Lessons from a Life in Safety: #1

My first job out of graduate school was as an OSHA Investigator.

I had an actual badge! I was a real safety cop!

The OSHA job was a good job, one I held for nearly 12 years.  In that role, I learned and experienced so much of what built my career.

You need to be a trusted advisor.

See, when I was with OSHA, I decided not to police safety—I wanted to teach people along the way.

Yes, I did issue citations—that was my job. And, yes, I did throw the proverbial “book” at employers when necessary. My job was to identify hazards and cite them.

However, and because I wanted so badly to educate, I developed a different approach to the 500+ inspections I conducted, inviting anyone and everyone at each company to join me for the journey. Sometimes that was a whole safety committee, a group of managers, the safety professional, the HR manager, or my personal favorite combination—a company President and the maintenance department. Why is that duo so exciting? Because leadership and maintenance would often times correct a hazard on the spot.

I tried to turn all employees into safety students.  For every hazard found, we discussed “why the hazard”, and how someone could potentially be hurt. This approach worked well because it personalized exposure for affected workers.

I never said, “That’s wrong, there’s a law, and simply moved on.”   I wanted to teach people to “fish” for safety, so they could deploy a safety skill independently, when I wasn’t there.

Why did I decide on that teaching approach so early on? Self-preservation, I think. My work was nearly always solo.

The only people who ever knew where I was were my administrative assistant and my husband.

Being a government regulator and doing surprise inspections…it isn’t a popular job. People got nervous and angry, and I never knew what I was going to walk into on a given day.

That’s why becoming the “trusted advisor” versus the “safety cop”, was really about protecting myself from harm in the beginning.

Over time, I felt like I was making a difference as people were learning and asking questions, thoughtfully debating the best ways to eliminate a particular hazard, for example.

Now, several years and several jobs later, I was working for a company that supported many different businesses across the country, one of which was a design/build firm that had just formed its first safety committee and asked if I could do a safety audit with them.

I knew right away that I wanted to apply the same approach I had used back when I was with OSHA.

And at first, the committee was a little pensive, with everyone standing around arms crossed, wondering how long an audit would take. So we started with something easy: checking fire extinguisher inspection tags, which weren’t filled out. I taught them how to properly inspect extinguishers, and we moved on to the next thing, and the next thing.

Six months later they asked me back, this time showing me all the things they fixed and taking me to places where they had specific safety questions.

They invited me again six months after that, only this time the committee led the audit—identifying hazards along the way, taking pictures and notes, talking with employees about their hazard exposure.

I was just there to clarify questions and answers.

They were fishing for safety and it was beautiful.

Because I had become their trusted advisor, I was able to arm them with enough information and confidence to build internal support, which helped when they needed to ask for budget on safety improvements and corrections.

Trust me and make yourself a trusted advisor.